When the editor is the star - Creative Excellence Fridays

Watching the Oscars we tend to focus on the stars, the director, and maybe, if we're lucky, the writer. But if you talk to a knowledgeable director, he'll often tell you the real star is the editor.  Ask Martin Scorsese why he's gone to Thelma Schoonmaker for the majority of his films dating back as far as 1970 with Streetscenes.

And why has Woody Allen used Alisa Lepselter exclusively dating back to 1999 with Sweet and Lowdown?

It's like a marriage.  When it works it works.  And great editor needs to be able to see the director's vision but also offer suggestions that take it to a new realm.  It's still the director's movie.  But the editor takes the movie over the endzone for the final spike.  And the director is still the hero because he/she hired the editor in the first place.   It seems like a thankless job.

Here are some notable works of movie editing magic, as chosen by Tim Dirks of Filmsite.org

The point of the blog this week is to turn your attention from the big screen to the little screen.  One of my favourite commercials right now is the snowmen gone bad commercial from TBWA for the Nissan Rogue.  It's an editing wonder.  Here is the longer cinema version.  Winter Warrior.  50 edits in this version.

The version that's getting all the exposure is the much condensed 30.   It takes the 50 cut version and slims it down to exactly 20 cuts.  Admittedly this longer version is much more enjoyable.  But full credit to the editors at TBWA's post shop for cutting a very ambitious, Michael Bayish spot down successfully to 30 seconds.

Film editors unite.  In so many ways, you're truly the star. 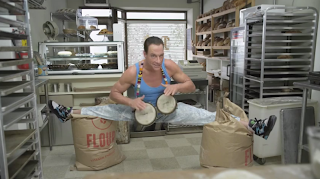 The media world is blurring. There was a time when movie stars didn't do television shows and only appeared in commercials when they only aired in other countries.

The internet changed all that. Kevin Spacey appears on Netflix shows (which he also produces - makes a big difference), Mathew Matthew McConaughey and Woody woody Harrelson appear in Showtime shows and all is still right with the world. Well, after all, it is cable.

Robin Williams in the Crazy Ones? Bad move. Not because it's television. But because it's a terrible, terrible show. Having said all this, what about the flurry of Jean Claude Van Damme commercials? Well, can you call two commercials a flurry? Sure, why not. First there was the heavily viralled Volvo truck commercial.

And now a new commercial for GoDaddy. All I can say is, thank goodness someone in marketing at GoDaddy realized that beautiful women walking around in bathing suits is not a long term brand strategy. The new Van Damme commercial for GoDaddy makes me smile every time I watch it. It's part pixie warrior and part Tom Cruise Mission Impossible. I just love that Van Damme has no problem poking fun at himself.  And at 3.2 million hits and counting,  it's go time.

If a tough guy can poke fun at himself, there is life after cancelation. I remember Eric Estrada from CHIPS back in the 70's. A few years ago he was featured in the commercial about has been TV performers shamelessly flogging products.

Estraddddaaaaa. It's about brand. It's about image. Nothing works better than well placed humour.

A very emotional stop smoking commercial was making the viral rounds earlier this week. This is the time of year when the media is inundated with stop smoking and lose weight commercials. But the formula is different now. A commercial release is simultaneously released with a viral campaign and social campaign to create as many additional impressions as possible. This commercial produced out of Singapore by Ogilvy and Mather was done originally in 2011. But it's making the rounds again and getting a fresh new life.

Another ad from NHS Smokefree in the UK features mutations on the cigarette. It is a powerful visual that stays with you.

I spared you the commercials that feature the holes in the throat, the animated recreations of what's happening in body, the lab cross sections of the lung and the brain.  As graphic as those ads are, they still have a difficult time convincing people to give up their personal right to slowly kill themselves.

As adults we tend to play off the death wish they talk about in an early episode of Madmen.   The researcher pointed out that humans revel dangerous in a bit of a death wish.  It makes them feel more dangerous and on the edge.  We're adults.  It's our bodies. We can abuse them anyway we like. The agencies who figured out that you have to think beyond your own skin are really on to something. Do it for the kids. Empathy.

Health Canada decided a few years ago to grab attention to the issue using humour. I'm not sure this will convince people to stop smoking, but it certainly makes one talk about it. And the viral on this was quite effective.

And this more recent one. The social nibbler. I love this ad.

Which approach works best?  It's still not clearly defined, any more than what brand of cigarettes appeals to a consumer.  But I still think that the most effective approach is appealing to the consumer's selflessness.  Killing yourself is one thing.  But poisoning the air your children are breathing three feet away; there's nothing sexy about that. 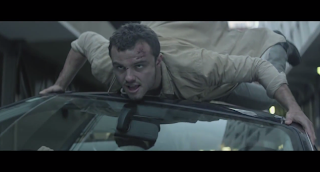 A great idea doesn't go unnoticed. In August 2013 we talked about an inspirational commercial produced in 2009 by Swedish director, Adam Berg.

Reviewing top commercials of last year I came across an ad from Saatchi and Saatchi New Zealand that was exceptional. But, not revolutionary.  Their creative team had obviously seen Philips Carousel 16:9 and were heavily influenced by it.  Here's the original ad from 2009.


And here's the creative from Saatchi New Zealand.  "Ultra Broadband is here - Waiting is over".

Does the idea that they "borrowed" from Adam Berg degrade the genius of "Ultra Broadband is Here"? Not in the least. The New Zealand team took a technique and fostered it to another work of art. This commercial took a powerful technique and created a dramatic visual  brand and it proudly promotes and sells Telecom New Zealand. Isn't that what it's all about?

Here is a video of the making of the Philips Carousel commercial. And yes there's as much effort behind the scenes as you thought there would be from the computer mapped camera shots to the post compositing and 3d modelling.

It's not easy. But the end result is definitely worth it.