With elbow pads firmly in position, people head to the malls tonight and tomorrow for the last weekend of shopping before Christmas. And this is the last Creative Excellence Friday post for this year. I wanted to wrap up with a bang and found the perfect commercial to start it off this week. I've railed on and on in this feature about the importance of not letting the sell get lost in the sizzle.  This ad by Miami MG for Panache Distilleries is very funny, but honestly, do you remember it's about vodka at the end, let alone whose vodka?

To add insult to injury, this brand was railed in 2011 for a very insensitive billboard posted in New York city. 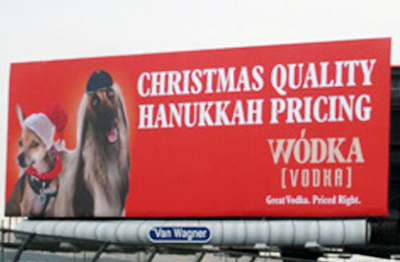 The agency went doe eyed and claimed innocence, but it was obviously a carefully planned stunt to gain free publicity for the brand. But is this the kind of publicity anyone besides a  cast member from Duck Dynasty would want? Sex sells.  It always has.  But it tends to sell much better when the product is inherently woven into the sell.  This ad is great for the leather and plastic industries.  But the vodka is an after thought.


Now to a commercial that hits the mark, and then some.  Jewellery advertising is all over this time of year.  It's difficult to stand out.  This commercial is not blazing a new path for the category, but it takes an old strategy and maps out a fresh message. The male voice is perfectly cast as a guy who sounds like he has his act together, knows what he wants and is madly in love.  Instead of a montage of couples attempting to touch as many demographics as possible this ad focuses on one special woman who is the centre of this families universe.  Beautiful slow motion cinematography and a carefully crafted mix of lifestyle and family shots make her seem real, and even without speaking, exceptional.   The ad was produced by New York's 3rd Strand, a video boutique that specializes in the jewellery industry.  This is a great ad.


That's it for this year. Thank you for taking the time to stop by and I hope you'll set aside a moment or two in 2014 to continue to read CEFridays each Friday morning. Have a beautiful holiday. We leave you with this Holiday video greeting card.  Happy Holidays from me personally, Heronymo, Ana and our happy little video branding family.