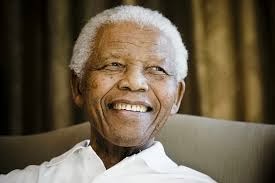 I had a dream last night. Not the Martin Luther King kind. The Nelson Mandela kind. The CBC was playing in the background as I slept and no doubt the mention of his passing caused the dream. Or the man simply took on a transcendental, angelic quality that permeated my dreams.

Whatever the explanation, Mandela spoke to me last night and gave me the warmest handshake as he turned and walked away and down the street into the distance. Perhaps I've seen one too many Mandela biopics, but it felt strangely calming.

It was a special talent of his if you believe the myriad of people lucky enough to have had an audience with the South African "father". I remember being a disc jockey at a Saskatoon radio station in the mid 80's and reading Bloom County. Mandela was featured in the strip, and across the liberal media as free society fought for his release. That day finally came in 1990 after 27 years.

Good night Mandela. There's nothing I could write here that would be more eloquent than what has already been written, but I wanted to say my goodbyes just the same. You're welcome back into my dreams any time.