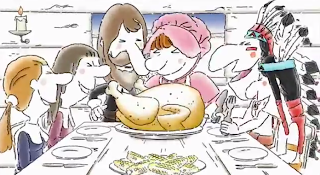 Marketing Energy Drinks seems simple. You show a clear picture of the can, and people doing things really energetic. Au contraire. As it turns out, every major drink company burst on to the scene with their own energy drink. And they all made the same claims. Pump one back and feel energized. Red Bull was an early brand on the scene and they took advantage of the cachet that comes with being at the gate early.

Hey, energy drinks are not really that different from marketing regular soft drinks. Except that they give you energy. A claim a Coca Cola or Pepsi can't give you. You can Do the dew, or Be a pepper. But can you be a bull?
Red Bull has been banking on it since 1987. The company was founded by Austrian entrepreneur Dietrich Mateschitz who appears to be sort of a real life representation of the dox equis guy. He's a man's man who has barrelled ahead regardless of any negative news stories that have been associated with energy drinks.
Here's the latest offering. How Thanksgiving actually came to be.


RedBulls market tends to be a younger, edgier demographic. This ad would definitely speak to that.

This advert, as the Brits call it, created a lot of negative controversy. Letters, emails and phone calls came in by the hundreds.


The lineage of the original passengers of the Titanic were offended that a brand would use a disaster like this as fodder for sales. The unfortunate part though, depending on which side of the fence you're on, is that controversy for a brand like this just "gives them wings."