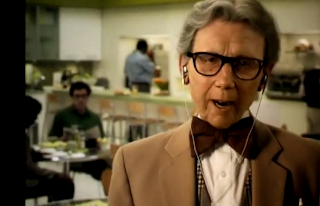 Companies all hope to create the iconic character that becomes synonymous with their brand. Christine McGee, Kernel Sanders, Wendy's Dave, they all became household characters. And if your iconic character is poked fun at by John Stewart or Jimmy Kimmel, you know you've hit the motherlode. One such character, growing up, was Orville Redenbacher. They didn't come any nerdier but his message hit its' mark. Orville Redenbacher popcorn became the benchmark for premium popcorn. The downside? Well, at some point, everyone dies. 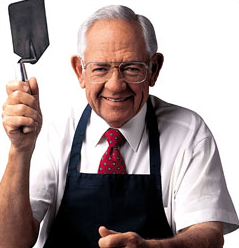 That sets the marketing team spinning to try and recover the brand that now has a huge hole left by their dearly departed talking mascot. And then the question of, what's appropriate as far as a continuation of the icon after he or she has stepped off into the great beyond.

Well the rule of thumb seems to be, wait a few years, then reach into the vault and pump some old commercials into the editing suite and see what you can come up with. Dave Thomas is being seen again, along side the new Wendy's spokesperson, his daughter. Kernel Sanders was revived, and yes Orville Redenbacher is popping again. But in 2007 there was a bit of a unique twist to the formula. Acclaimed director David Fincher (Social Network, Girl with the Dragon Tatoo, House of Cards) has always been a keen student of visual effects. He was called upon to not just edit a spot together with old footage, but create a completely new commercial featuring Orville himself.

First, for a fair comparision, from 1985 here is the original Orville.

Now, here is the David Fincher digital revival from 2007.

I have tremendous respect for David Fincher, but this one doesn't work for me. It seems, well, digital, and a bit stilted. And frankly, just creepy. I think it would be more appropriate inset inside an episode of AMC's The Walking Dead.

The good news is, an actor can breathe easy, at least for now.  Although an actor still might want to think about putting a little away for a rainy day. Because natural rain has already been replaced by digital effects.