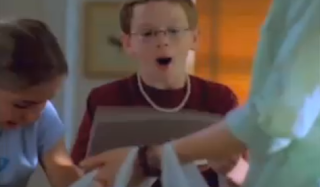 Summer is more than half over. Every year, at least in the Toronto area, we have the occasions that mark the passing of summer. The Molson Indy in July. The Jazz Festival. The Taste of the Danforth in August. The CNE with the Tiny Tom donuts and the airshow officially sounding the buzzer for the beginning of school.

Dating back to the mid nineties, Staples has used August as the launch pad for back to school marketing with a Christmas campaign. Christmas in August. Each year deliriously giddy parents sale through the aisles at Staples singing "It's the most..wonderful time... of the yearrrrrrrr." School supplies mean no more mopey teenagers wondering around the house saying "I'm bored. There's nothing to do!" Short of showing them where the traffic is that they could genuinely play in, the back to school Staples campaign is a celebration of renewed adult freedom.  This is one of the early entries from 1996.


Fast forward to the summer of 2013, and Maclaren has offered an updated version of the campaign. Two Staples employees watch the clock tick to the official beginning of Back to School Shopping Season.

It's a fun spot, but it doesn't have the same magic as earlier campaigns like the opening spot from 1996. Granted, it's difficult to take the same idea and squeeze out magic from an almost 20 year old tube. There are few campaigns that have carried on with a concept built around the same song for such a long period of time.


I have to confess I'm more partial to this campaign for Meijer. The performances are great. And the announcer's snide comments cap it off.

I can guarantee if these kids really did get this excited about school supplies, it's because they were not just admiring the glue, they were sniffing it.


And finally, this one from Old Navy.  Warning, some teenage screaming occurs.  But if you've survived the kids in the house since June, this isn't unfamiliar territory.


I love the sound design and the homage to horror films in this one.  Nice job Old Navy. And does anyone know the desk's agent? There may be hope for me yet.