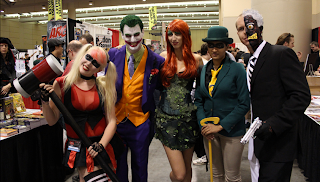 Fan Expo is on in Toronto. A celebration for everyone who has ever tied a towel (aka cape)  to the back of his or her t-shirt and jumped off the picnic table (aka soaring at the speed of light).

Fan Expo was created in 1995 originally as a celebration of comic books. I used to call it "a Trekfest on Steroids" but it has since grown considerably and now includes film and pop culture with a who's who of invitees. And for those who follow fantasy, sci-fi and horror films, this truly is the one convention not to be missed.

Fan Expo has also become a part of the genre of influence for creative types the world over including director Adam Berg.

Swedish born Berg (say that three times fast) started off shooting zombie films in his parents' back yard. His love of film and fantasy led him to the Stockholm Film school. He went on to produce a number of attention grabbing promos and commercials including an online spot called Carousel for Philips 16:9. That spot was featured in 50 Cen'ts 'OK You're Right'' promo and was blogged about by Kanye West.

He then produced the most successful ever Nike football campaign, 'Write the Future'.

Film schools should have every student sit down and watch "Write the Future" and study the edits and transitions.  A beautiful piece.

Adam Berg is now one of the most sought after directors in the commercial industry and recently just completed a CG film for Sid Lee Paris.
Currently Adam is working on a remake of David Cronenberg's film Videodrome.