The case for comedy in insurance commercials - Creative Excellence Fridays

As a boy growing up in the sixties, I can still remember the major players in the insurance industry. Like a good neighbour, State Farm is there. (the jingle still rings in my head). 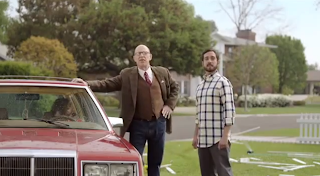 AllState - You're in good hands. And Mutual of Omaha's Wild Kingdom show with the legendary zoologist, Marlin Perkins. This was a stroke of genius on the part of MOO because the show was parodied by Johnny Carson and numerous other comics of the day.

I did some research and was trying to determine when insurance became a laughing matter.  Many companies feel it's not.

However the major players today have discovered, humour makes a lasting impression.

So what insurance companies have taken the leap of faith and cast their fortunes to the pens of the comedy writers?

Geico was an early adopter.  I've featured them before in this blog because of their nimble ability to mix brands and visuals with the agility of a carnival juggler.

Much of the ground breaking advertising you've seen today was created by Richmond Virginia's The Martin Agency.

First, they have the Geico, the talking green reptile who, for some inexplicable reason has a British accent.   The cavemen, Maxwell the pig, the bland salesman...all come from the minds of the Martin Agency.  It's complex branding that somehow manages to push envelopes constantly while retaining a sense of brand unity that never let's you forget...it's a Geico commercial.

Geico's "happier than..." campaign has drawn lots of attention.


State Farm hasn't abandoned the decades of linkage to the "like a good neighbour" positioning line. But they too have connected their brand to humour.  They've attached themselves to two shops and are doing some back and forth.  DDB and Draft FCB are both working on the State Farm television brand as of this writing. This spot fires on all cylinders. It builds around the sales point that your agent is working round the clock, but does so with great writing and performances.


I particularly like this creative from Farmer's Insurance.  It's from Santa Monica's RPA.  And you have to give full marks to the actors for having nerves of steel with the carefully choreographed scene where the teen's skidding car stops inches away.

Humour is always a calculated risk.  But who better to decide what is the most profitable risk management strategy?

Any conclusive evidence?  The only kind that counts. Growth.  Geico is one of the fastest growing insurance companies over the last ten years and is poised to over take All State for the number 2 position in auto insurance very soon.   And given that one of the shrewdest investors in the world, Warren Buffett,  owns a large stake in Geico, you can count on other major players to be turning up the laugh factor soon.