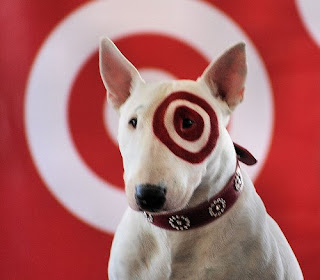 Flicking on the air conditioning for the first time this year. Putting on my first pair of shorts and hoping my white legs don't scare small children or set off any Nasa warning alarms.  And remembering tennis court etiquette such as being discrete when you bring a coolie on to a public court. All signs summer is here.

To start off this week,  an ad from Canada's newest large retail corporate citizen.  Target has come to Canada. Just in time for summer.  I heard rumours Walmart has a picture of the Target pitbull up in their boardroom covered in darts.  But then, that's just a rumour.  Out of the gate, Target appears to really have their act together.  They're hoping to avoid the negative press that Walmart deals with regularly in large urban areas. Walmart has taken on a bit of a reputation with social environs to be a vacuum of independent merchant culture. Petitions go out when a Walmart attempts to open in a Toronto urban centre that is already being served by small merchants. Target hasn't been tagged as the spoiler ... yet.   There's an interesting story behind who a shift in agencies for Target.   Wieden + Kennedy were dropped this year when there was a management change.  Target has been known for using a variety of shops to create their now iconic look, including PMH Minneapolis.
In Canada, hotshop KBS+ is shepherding the brand.

They say if you are good in one life, you are rewarded in the next. Now we know who the "they" is...Volkswagen.


Enjoy your weekend. Go ahead, have the gazillion calorie iced coffee frapachocolicious. You can always justify it by pulling your bike down off the hooks in the garage.  What do ya mean now I have to ride it?  Wasn't the effort to lift it to the floor enough for one day?