The movies. They have always been like a comforting old friend. The ultimate escape from whatever ails.  And they've inspired many a Creative Excellence blog on Friday mornings.  Roger Ebert escaped to the movies as film critic of the Chicago Sun Times since 1967. His type writer went silent yesterday after his final battle with cancer. 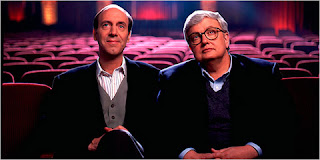 His words so eloquent, he was always one of three critics I would base my hard earned movie going dollar decision on. If the triumvirate of Ebert, Peter Traverse and Richard Corliss of Time magazine all gave it the thumbs up, I would plunk my money down on the counter and know chances were excellent I was in for the thrill ride or the emotional departure I needed for that drug free fix of the week.

Roger Ebert lived his life with class and his words moved many far beyond his film recommendations.
This passage from a few years back creates the perfect eulogy penned from his own mind.

Salon-Roger Ebert - I do not fear death

We can only hope that Gene Siskel took the time to have Roger's celestial seat in the balcony steam cleaned and put on a fresh batch of Orville Redenbacher.