Creative Excellence Fridays - Evian hits another one out of the park 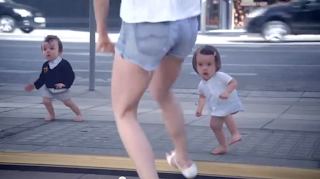 Evian knew they were on to something when the first "baby" viral came out in 2009.  On the official Evian link alone they have almost 67 million hits, and people are still talking about it.   This is the classic definition of the act of branding. It doesn't talk about the water. It doesn't mention anything about the health benefits of water as an ad category. It just rips it up with adorable computer composited babies for 60 seconds with the Evian billboard beginning and end.

Hey, if your product already has brand acceptance, it's about turning it up to the next notch right?

I know, I know, this doesn't clearly adhere to the golden rule "build your entertainment around a product sell point". But 67 million plus impressions on a product that is all about perception is reason enough to stray from the rule book yes?

Evian babies is the technical progeny of MP, a 25 year old visual effects shop whose client list is a who's who of commercial and film professionals.  And now the follow up has dropped and it was worth the wait.


Yes the compositing is world class, but the editing also is superb. The reveals of each character are brilliant; either starting with the adult and then cutting to their doppel baby, or showing the adult first and then beat cutting over to the baby.

I love this campaign.  And with 35 million hits in less than a week, I'm not alone.