Burger King has a new ad agency.  In the last few years they appear to have changed agencies almost as often as Kardashians change men.

The latest shop is Mother, New York.  The agency has offices in South America and the UK as well;  the UK being the largest independent ad shop.   Their motto?  To make great work, have fun and make money.  Always in that order.

In taking the reins of Burger Kings new television brand initiative, they appear to have taken a page from long time purveyor of burgers, A&W.   What's the commonality?  An extremely likeable store manager.  Someone with charm, humour and dedication.

A&W's ads feature veteran actor  Alan Lulu.  When he's not talking to people going through his TV drive through, he's auditioning for the next role or appearing in stage productions. His TV credits are quite substantial.  In one A&W commercial he does a little song and dance number that definitely tips his hat to talent far beyond the A&W ads.  This ad features actor Ryan Beil as "the employee in training."


Now, enter Mother.  Their focus groups clearly indicated they needed to soften the edge their predecessors had created and shape Burger King into something more family friendly.  The new ads are, well, fun.  And the new store manager definitely brings the same magic as Alan Lulu.

I have to admit I like the new BK commercials.  But for the same reason as the A&W ads.  Strong performances, likeable actors and quirky scripts.  I'm not a 17 year old deciding where I'll grab my greasy burger after a night of hanging with my buds.  But I'm sure Mother's research department has already thought this through.   For more in the BK series of ads, check out the Ad Age article. 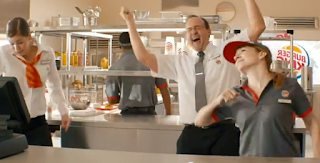