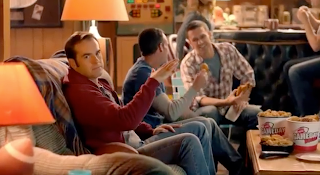 Creative Excellence Friday's first blog of the new year looks at Couchgating. It's a word. Look it up. At least that's how it's described in this new KFC viral piece that is starting the rounds. Will this show up on broadcast television? No doubt.

But the beauty of the web allows a piece like this to be played with all the comic timing it requires to have maximum impact. Sometimes it just takes a minute and 12 seconds to say it. This is something we didn't have the luxury of in the pre-net days.

I'm not trying to sound like one of those "in my day things were better" guys. Because I truly love the video canvas and lack of time restrictions.   Bring it on.


However, if someone did just happen to want to make a commercial in exactly 60 seconds,  here's proof it can still be very effective without "cramping your creative style".


Don't you love the performances? Perfectly cast. And who doesn't know someone like that; that guy/gal who comes around your cubicle with the sole purpose of having you entertain them because they're bored.  A million views later, a lot of people obviously agree...ads can be entertaining as hell.