Since I was a boy, I knew it was Christmas when the Coke commercials hit the television. The "I'd Like to Teach the World to Sing" series were legendary and several versions were created throughout the 70's. Coke ruled Christmas. At least when it came to soft drink commercials. 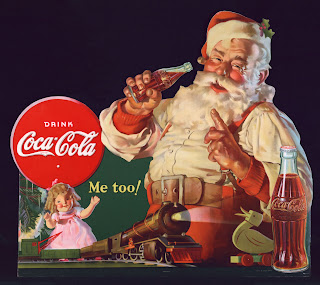 On the Coca Cola website they draw on their direct involvement in the evolution of the Santa we know and love in North America today.  An interesting read, 5 things you never knew about Santa Claus and Coca Cola.   For example, I had no idea that the Santa we see today only started appearing around 1931.  Prior to that Santa had a variety of shapes from a tall thin man to a green elf.

It's pointed out to me that in Eastern Europe, for example,  Santa looks nothing like what we perceive him to look like in North America.  Their Christmas is based on the devil and the angel.  The name Santa Claus was said to have been derived from the Dutch word Sinterklaas.

This commercial draws on the Coke magazine ads that helped to creat the Coke Christmas brand in the last century.

And finally, this year's offering. It mixes high production values and a real life street promotion to create a viral effect.

Sorry Pepsi. You may taste better. But Coke has the inside track with the North Pole.