If you read this blog with any frequency, you already know that our golden rule is "don't entertain the life out of the selling point".  If your humour or drama goes in such a radical direction that people have no idea what you're selling, you might as well put the clients money in a blender and set it to stun.


This commercial for Samsung TV's builds a pretty dramatic and convincing argument for buying a new flat screen.

This spot  focuses on soccer madness, but I guarantee it would work in Canada under the guise of football, or hockey (if they ever get back on the ice).

Next up, a commercial from one of my favourite on going series, Capital One.   Capital One has really pushed the brand into new territory with their humour ads and positioning statement "What's in your wallet".  This campaign began back in 2000 with D'arcy advertising.  Then in 2011 Capital One moved it over to McCann Erickson.  Odd move given the number of awards D'arcy won on their behalf. Here's the very funny Vikings commercial from 2009.


Next up, an interesting twist on bank commercials; letting the consumer direct the spot. It's probably influenced by the Capital One popularity. 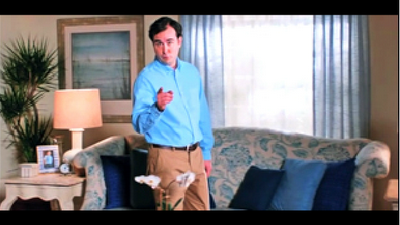 This definitely has a Capital One feel to it.  I applaud the bank's initiative to get the consumer involved, even though you can bet the whole process is being very closely monitored and the actual, final commercial will have the full filtered approval of the agency I'm sure.

That's it for this week.  Thanks for stopping by. If you have ideas or themes for future Creative Excellent Friday's, remember, sharing is good. Have a great weekend.