Welcome to part II of Celebrity Voiceovers vs Career Voice Talent Last week we touched on the concept of hiring celebrity voices as opposed to a journeyman voice talent. We looked at some of the top voices from Hollywood voicing top brands. A few more reveals; John Goodman for Dunkin Donuts, George Clooney for AT&T, AquaFina and Budweiser and Juli Roberts for AOL. What some take issue with is the fact that she received reportedly seven figures for the commercial. Seven times the amount a union "non celeb" talent would receive. Is it worth it? As mentioned last week, yes there's cache in using a well known voice.

But listen to this voice. John Mohr. A beautiful sound. Layers of texture.

On the female side, Liisa Lee has beautiful versatility to her voice.

And then there's the movie trailer guys. They are what I call pseudo celebrity voices. No one knows their name. But we definitely know their voice. Don Lafontaine was at the top of his game when he passed away in 2008.

Celebrity or journeyman. Who's best?  Only the check-out line knows for sure.

My American Experience - the privately funded As it Happens

Radio has always held a special place in my heart. When the phone rang and I was hired as a part time disc jockey at my home town radio station in 1980, I thought it was the happiest day of my life. And prior to that I would sit in my room and listen to nostalgia shows playing old time radio from the 30s, 40s and 50's.

So when I heard all the coverage Ira Glass has been getting promoting his book and tour in Toronto, I was overjoyed to see the publicity. Although I find it funny that, what Ira is doing with his PBS show "My American Experience" has been done on the CBC for as long as I can remember. Say what you want about the mother corp, with shows like As it Happens and Quirks and Quarks, we have enjoyed a comparable level of radio excellence for decades. But "My American Experience" continues a tradition of radio excellence and theatre of the mind journalism, and I applaud that at every opportunity.

Radio will always be with us as long as there is imagination and an appreciative, intelligent audience. And a long car ride.

I've wrestled with this topic over the years. I'm not a "celebrity", just a professional Actra voice talent. Is it fair when a client, or an ad agency goes for the cache of a "celebrity voice" verses hiring a journeyman man or woman who have all the texture and multi layered nuances of a well known actor.
So why hire a Hollywood actor to be your SOV (silent off camera) when you have a myriad of pro's available to you? There are a couple of reasons. #1 You like the sexy factor of having a well known actor attached to your brand. Even if the general public isn't aware, the client, and all the client's friends know that Jeff Bridges is the voice behind Hyundai. #2 An actor brings a certain reality to his or her read that may be difficult to find. An actor who has lived a full life brings that reality to the read.

But does it work every time? Not in my opinion. Take David Duchovny for example. Don't get me wrong. I adore Californication. But you can't tell me there wasn't a better "non celebrity" read available for Pedigree Dog food.

Ones that do work? And work exceptionally well? As mentioned above, who doesn't recognize the warmth of Morgan Freeman. Even if the lay person says, I don't remember who that is, but that voice sounds familiar.

And Jeff Bridges is attached to not one but 2 products. Duracell and Hyundai. A little known fact; actors are not allowed to have their voiceovers appear in commercials right next to the Academy Awards segment they appear in. Jeff Bridges found this out first hand.

Coming up next week - a reveal of two of Hollywood's leading actors who lend their voices to brands, and some workin' class men and women who are full time voice actors who bring it time and again behind the microphone.

We do love our toys. And Microsoft is about to add a new one to Santa's potential list. Reviews are just starting to come in but details are slim at this point.

Microsoft has been a johnny-come-lately in recent years playing catch up with the Microsoft mobile entry and now this tablet. Microsoft still has deep enough pockets to possibly buy alliances that will enable them to make their new tablet relevant. Here's a sneak peak.

Red Bull blows the doors off competitors with Baumgartner sponsorship

Marketing released an article today entitled "Will Baumgartner's jump sell more Red Bull?" I'm not sure this even merited an article. It couldn't be more obvious. Yes. Yes. and gurgle gurgle, glug glug, yes. I haven't seen such a well positioned, and more well followed promotion since, well, Evil Knievel jumped over Snake River in Idaho in 1974. But it wasn't nearly as slickly produced, and the obvious sponsorship connections were not in place. This was a no brainer.

Modern daredevil jumps (almost) from space, setting a record for the highest jump, soaring the speed the sound to the earth. RedBull's Facebook page got over 216,000 likes and 10,000 comments in under 40 minutes according to the CBC.

Think about the product. Liquid to fuel energy and adventure. If you're in the target group, what energy drink are you going to choose. The answer is obvious. How much did this sponsorship cost? Certainly comparable to a Superbowl commercial, but with exponentially more mileage. Drink up Red Bull. You deserve it.

This week, on Creative Excellence Fridays - model verses model. A very funny commercial with super model Brooklyn Decker.  This is a teaser for next week's blog, celebrities verses voice actors. 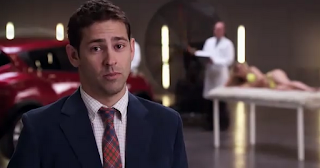 John Burke Krasinski from the Office is the talent in this commercial. Should well paid actors be the voice on commercials, denying professional voice actors those opportunities? More on that in next Friday's CEFridays.

Creative Excellence Fridays takes a break this week because of turkey day in Canada. In its' absence, a nice little bit of editing from the folks at Apple. Enjoy.

The new iphone 5 is out. The slogan? The biggest thing to happen to iphone since iphone. Apple has always had a knack for hitting home runs with their brand appeal and cache. I wrote a week back that Samsung's creative gurus needed some credit as well with their, "the next big thing is already here" campaign for Samsung Galaxy phones. But I have to say, the new iphone television/online commercial is pure Apple. Apple is featuring a series of commercials, each one focusing on one major new feature of the phone. This spot is fun, clean, functional, and features another celebrity voice, Jeff Daniels. Daniels has come a long way since the philandering husband he played in Terms of Endearment. He has a featured role in the seminal Loopers movie. And he's been viraled all over the internet in clips of The Newsroom, the Aaron Sorkin HBO hit. Apple has no problem with reaching into the Hollywood kit bag to pull up a voiceover talent. Richard Dreyfus and Peter Coyote are just two names from the past. We subconciously hear and appreciate the authenticity a skilled actor brings to a delivery. Jeff Bridges, George Cloony, John Corbet. And now, Jeff Daniels. "The Thumb" With over 30 years experience, Tim McLarty  currently works out of Toronto Canada as a writer, producer and media strategist producing advertising and entertainment content.