Earlier this week I received a promotional press release about Cheerios.  The brand has been around a long time.  And General Mills and their AOR Saatchi  and Saatchi are drawing on the history of the breakfast favourite.

They've revived the "Cheerio's Kid" to trumpet the benefits of eating Cheerio's to fight off bad cholesterol.
I love the retro feel of this. 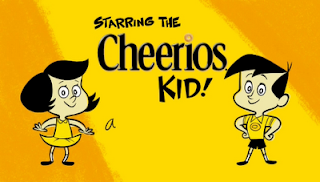 This one is from 1957 and heavily influenced by the serial adventure reels of the 30s and 40s.  The Cheerio's kid is a good guy right to the end. Although you have to wonder when he agrees to give up the girl for a box of Cheerio's.

We go back to the 60's for a little Go power for Bullwinkle.  Cheerio's used cartoon characters heavily back in the 50's and 60's, and even 70's to drive young loyalty towards the big O.

This commercial is boomer friendly.  Especially if you have a fondness for badly animated commercials from the 60's.  Which, thanks to the cost savings of "limited animation" from Hanna Barbara, that pretty much took in all of them.  But we watched them anyway.