In the first episode of Madmen, Don Draper talks to a waiter in a restaurant about why he chose to smoke LuckyStrike cigarettes. We look back on the culture that created commercials from the 40's and 50's with curiosity. It was the early days of consumer research and "getting into the head" of the consumer. Primitive as Draper's method was, it was effective. 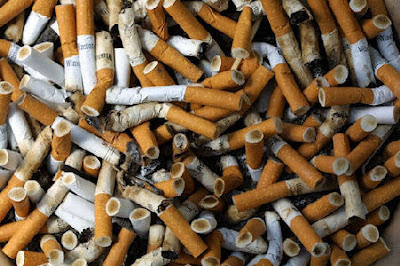 Selling a product which we all know kills, is a special assignment in its' own right. Cigarette advertising was banned in the United States since the early 70's. New Years eve night in 1971 The Tonight Show aired the last commercial, a :60 for Virginia Slims. In Canada voluntary restrictions on television were honoured by tobacco companies from around the same time.

I recall the topic of ethical products being advertised during a lecture at the advertising program of St.Clair College in the late 70's. My professor, George Bauman was one of the Madmen. He worked in the advertising industry in Chicago in the 1950's and 60's; he worked hard, drank hard and smoked ...a lot. Therefore he didn't understand why one would question creating a convincing campaign for a product was a problem. The client was paying the bills and hiring his shop to inspire, sell and motivate. It was that simple. And given the fact that George was a chain smoker, it was almost hypocritical of me to bring ethics into it. Dangerous or not, it was a product he truly believed in and consumed. So who better to praise the merits of a relaxing puff in a moment of relaxation.

It probably doesn't come as a big surprise that George has been gone a long time. See, worked hard, drank hard, smoked a lot. But George played hard too. So today's CEFriday blog is dedicated to George.

The first commercial features Fred and Barney. In today's climate it seems very odd to see two cartoon characters puffing away on a cigarette.

This commercial for Newport is all Madmen. Young attractive woman making eyes with a middle aged man. This campaign was definitely written over a three martini lunch.

And finally, this Lucky Strike commercial. It's truly awful. So much so that it's comical for all the wrong reasons. But time does that.

If you enjoyed these,  watch these other cigarette ads on this link from Classic TVAds.

But first, you may want to light up with a refreshing, menthol cigarette.   After rounding up a few hundred head of cattle, surfing the great barrier reef and rebuilding an engine of course.