You can count on one hand, and the number of ads that became game changers; ads that rewrote how it's done. Volkswagen's legendary ad campaign started by DDBO is still influencing ad minds some sixty years later.

Who were Doyle Dane and Bernbach?
William Bernbach formed the shop along with colleagues, Ned Doyle and Maxwell Dane in 1949. It wasn't long after that they started creating the revolutionary ad campaigns of the 1950s and 1960s.


DDBO's radical approach was featured in the well researched Madmen. 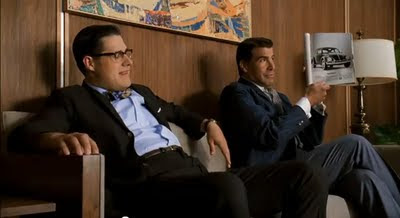 Bernbach was one of the first to look past the surface needs of consumers and was determined to get into their heads. His strategy was to keep customers by creating and nurturing them as brand ambassadors. It's a strategy that has worked well for legions of advertisers ever since. Harley Davidson, Lulu Lemon and countless others have made the "exclusivity of the club" their number one drawing card.

Bernbach also pioneered a new visual approach, along with his chief creative design head Helmut Krone. They created a simplicity in their print that was so different from the norm, it couldn't help but stand out. 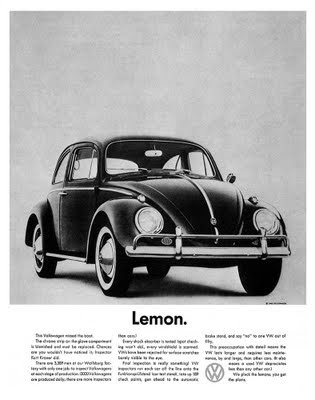 DDBO repeatedly used photographs as opposed to the expensive, highly touched up illustrations used traditionally by competing agencies, giving birth to consistent, unique, print ads that set the agency and brand apart from the rest.

Because Volkswagen’s advertising budget in 1960 was only $800,000. DDB’s minimalist, black-and-white technique, coupled with irreverence and humour, served Volkswagen's purposes. And each Volkswagen ad was designed to be a stand alone as a viable advertisement, creating further savings.

The 1959 Think Small Volkswagen series of advertisements were voted the No. 1 campaign of all time in Advertising Age The Century of Advertising.

In the spirit of trendsetting creativity, Volkswagen's current brand is continuing to be innovative with the latest campaign. A commercial about getting you to help them make a commercial.
It's social media supreme.

Thanks to Natalie Secretan from Fitlode.com for this week's inspiration.

Have a great weekend!